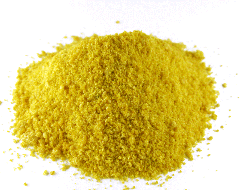 Long before I began teaching the undergrad orgo labs full-time, I was a TA for this course when I was a chemistry graduate student at UIC. At the time, there were few analytical techniques available for the characterization of organic molecules: no melting point apparatuses, no IR, no TLC and a sporadically functional GC with an unbearably slow analog plotter. A typical synthesis lab was often concluded by the students proudly shoving a yellow powder at me exclaiming, “See, I did it.” Sadly, I would acknowledge their accomplishment with a solemn nod, after which they would chuck their powder into the waste container with a strange jubilation. What was the point, I wondered. That yellow powder could have been anything. After about three years as a teaching assistant for this course, I was shocked one day when I found an infrared spectrometer in what is now the instrument room. I couldn’t believe we weren’t using this equipment in our labs. When I was hired as the full-time instructor, I made utilizing the IR my first priority.  Of course, I quickly realized why this technique had been left by the wayside for such a large class: time. Time training TA’s and students, time creating instructional handouts, and time maintaining the spectrometer were all factors, but the time that it took students to acquire a decent spectrum was the most formidable challenge of all—primarily because of the difficulty students had with sample preparation. For liquid samples, students sandwiched a thin film between two NaCl plates. After the tenth plate was ruined by accidentally washing with and thereby dissolving in water, we switched to disposable PTFE cards. These worked well enough, but it was difficult to get spectra of volatile samples. 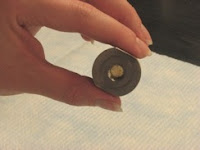 Solid samples had to be ground with anhydrous KBr and pressed with a die into a transparent disc. While seemingly straightforward, a number of conditions had to be met precisely right in order to obtain a disc of sufficient transparency and with a high enough sample concentration to acquire a spectrum in less than 5 minutes. The tension was palpable during these labs, especially when time was running short and the line for the IR wound outside the instrument room like a snake threatening to choke the sanity out of student and TA alike. 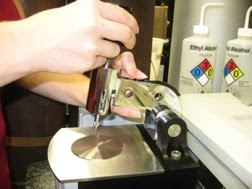 I’m happy to say, those days are over. The attenuated total reflectance (ATR) accessory, which I have fought to acquire since I began teaching this course, has arrived thanks to the differential tuition money that was made available to the Chemistry Department this year. After several tedious hours of tuning, aligning and swearing, the Pike Technologies GLADiATR was successfully installed. Then came the time of reckoning. After acquiring 64 background scans, I nervously applied a small amount of solid acetanilide to the 2 mm2 diamond crystal, lowered the pressure clamp and then turned the clamp dial clockwise until the pressure tip had pressed the solid into the diamond at 40 pounds of force. I clicked the scan icon on the screen and one minute later I was looking at my first successful ATR spectrum. The results were amazing. The total acquisition time from start to print was 3 minutes—a far cry from the 20 minute average for the KBr technique. Could it really be this easy? After twenty or so spectra later, the answer was a resounding yes. I was ecstatic. It’s a great feeling to know that this technology will radically change how IR is approached in CHEM 233 and I am anxiously awaiting to see how it will be received by the CHEM 233 students this semester.
Please click here for a full-color version of the instructions for using the GLADiATR accessory.
Posted by Dr. Landrie at 11:55 AM 0 comments

To iClick or not to iClick 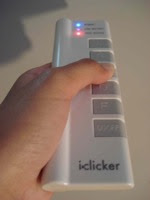 A couple years ago I sat in on a lecture at UIC where the instructor was using technology that allowed her to poll her students during class.  She would ask a multiple-choice question, which was duplicated on the overhead projector, and then her students would punch in A, B, C, D or E on their hand held clickers before the timer expired. Within seconds, the results of the poll flashed on the screen—eerily reminiscent of a Who Wants to be a Millionaire lifeline. I was hooked instantly. Not only do I love gadgets, Millionaire and statistics of every kind, but it also seemed like an ideal method for communicating with students in large lectures. Any teacher worth their salt continually asks themselves, “are they getting it?” Some are even brave enough to ask out loud even though they know the question will likely be regarded as rhetorical and disappear into the echoes of the lecture hall. What better way to find out then a reliable polling system such as iClicker?
You are wondering, of course, how this topic is relevant to the laboratory courses blog. In truth, it isn’t; however, next Spring I will be teaching one lecture of CHEM 232 (Organic I) and I am considering using this system. I’ve considered many of the advantages and disadvantages from my perspective. What I don’t know, however, is what students at UIC think are the primary strengths and weaknesses of this system. I would welcome any comments you have. Some key questions that must be considered are:

• What are good and bad polling questions?
• Should the system be mandatory?
• Should the questions be worth points? If yes, what percentage of the course?
• How many questions are too many in one lecture, one semester?
• Is the technology reliable? Is record keeping feasible?
• Will students remember to bring their clickers?
• How much do the clickers cost? Is this a financial burden?
Posted by Dr. Landrie at 12:04 PM 0 comments